The Lacanian Review No 13:  The Woman

The fact that bodies encounter two signifiers, man and woman, is problematic for speaking beings. Now the backdrop of inexorable culture wars, feminism turned inside out, and renewed movements that give voice to the experience of women necessitate another look at the infamous words of Jacques Lacan: The Woman Does Not Exist. This saying was built from a logical investigation in psychoanalysis that began with Freud’s observation that there was no inscription of woman in the unconscious. It opened a clinical paradigm oriented by the logic of the “not-all”—a way to work beyond the binary and without reference to universal categories. It is difficult to handle Lacan’s formulation without understanding feminine and masculine as structural positions—modalities of jouissance—that have no essential basis in anatomy or gender. But before jumping to conclusions that do not exist, it is best to listen and to read.

The 13th volume of The Lacanian Review examines the word woman in psychoanalysis today. We started by writing The with a bar through it to indicate the infinite possibilities for invention and contingency when a signifier as universal index fails to capture all of one’s experience. In this issue, readers will find a new bilingual translation of Lacan’s writing on Marguerite Duras, Jacques-Alain Miller’s text “Of Women and Semblants,” an interview with curator Lynne Cooke on 20th century women artists working with textiles and abstraction, and a collection of new work from the World Association of Psychoanalysis responding to The Woman Does Not Exist. Non-existence develops an orientation, one useful for working with art, psychoanalysis, politics, and other fields that contend with what Lacan named the real.

Jacques-Alain Miller, Of Women and Semblants

Christiane Alberti, Introduction to “The Woman Does Not Exist”

Ana Viganó, A Frida Solution: Writing with the Eyes

Third Thread
Lynne Cooke and Robert Buck, A Conversation: Of Her Own Making

Sarah Birgani, Poetic of the Feminine

Marie-Hélène Brousse, A Barre Over the Discourse of Psychoanalysis

Does The Feminist Exist?

Philip Dravers, The Witches of Macbeth 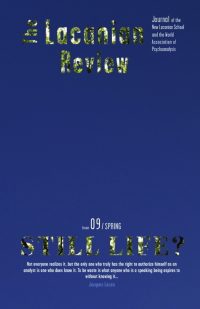 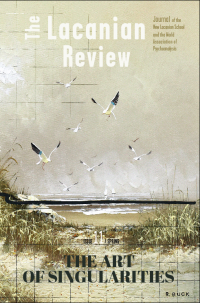 The art of singularities 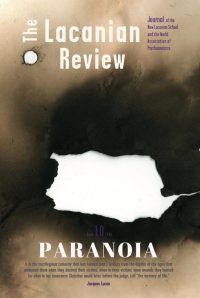