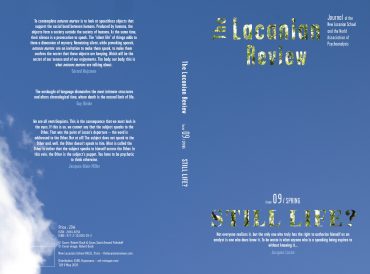 An interrogation at the crossroads of the barrier of beauty and anguish that has gripped the planet when facing coronavirus. Aesthetics and environment provide interpretations of the same object cause: as Lacan says, “the Lethal factor”. In this issue you will find psychoanalysis multiplying perspectives. This volume features a bilingual version French-English of fundamental texts of Jacques Lacan and Jacques-Alain Miller.

We began our research for this volume of The Lacanian Review with an equivocation between the two languages of the New Lacanian School, English and French: Still Life – Nature Morte. It implied an orientation to the drive, persistence, even still, on the side of life, and a painterly gesture towards the drive on the side of death that permeates nature. Nature Morte—Dead Nature. Fallen tulip petals and decomposing fruits plucked from the source, encaptured in composition, life made still by the gaze. For how many decades have scientists and activists warned of the death of nature? From Silent Spring to the unravelling of the Paris Climate Accord. How to persist in living when it has already been too late for us for so long? Yet, we keep doing it, still, despite the momento mori that accumulates from the production of life, waste. Lacan said in 1974, “To be waste is what anyone who is a speaking being aspires to without knowing it.”

The encounter with a second signifier of our silent spring, corona, reinterpreted our still life. In the span of one month, the world, our nature, came to a standstill, the pause that brought global production to its knees: a lockdown of social movement. The death count passed one million worldwide and then next day the media highlighted astonishing drops in carbon emissions, clear waters in Venice, blue skies, and the flourish of bird calls heard this spring in empty city streets. The dead and nature. An ordered pair in an inverse relationship.

Our patients speak of the paradoxes of time during this pause. A shifting global study of the real of time and space impacting the speaking body. A crisis of temporality: when will this be over? How long will this last? It exposes a lack in the Other. Nobody knows, neither science, nor government. Yet analysands willing to push the inert real of their symptom to the very end, have been able to say something about how it ends. Not the end of the world, not the apocalyptic fantasy of the pandemic, just the end of analysis. Thus this volume of The Lacanian Review collects a dossier of testimonies and texts on the pass presented in Ghent, at the Premiere Event: The Pass in Our School – Interpretation Encore. They attempt to transmit what can be said about the end.

Speaking Being is Waste
Laura Sokolowsky, Psychoanalysis is an Anti-Initiation

Gérard Wajcman, The Lives of Nature Morte
Peter Wadhams and Janet Haney, The Iceman Speaketh of the Arctic Death Spiral

The End (of Analysis)
Bernard Seynhaeve, The Stars are Aligned
Anna Aromí, Event: The AS and the School One
Domenico Cosenza, The Pass, Between Event and Interpretation

Anne Lysy, What Words, What Body?

Dominique Holvoet, The Pinning of Someone Unplaceable

Jean-Daniel Matet, The Pass, Not Without the School

Alexandre Stevens, From the Pass to Interpretation

Pascale Fari, The Unconscious is its Interpretation

Jacques-Alain Miller, We Are All Ventriloquists

A Real Science of Life?

Éric Laurent, Preface to the German and Hebrew Editions of The Other Side of Biopolitics

Antonio Di Ciaccia, The Atopia of the Unconscious
Yves Vanderveken, The Unconscious and the Brain: Nothing in Common

What to Do With Objects
Lucie de Saint Blanquat and Fred Baitinger, The Littoral Condition of Earth Art

Politics: We Are Still Alive?
Guy Briole, A Gray Discourse
Éric Laurent, Europe Through the Ordeal of Hate (Part I)

Éric Laurent, Europe Through the Ordeal of Hate (Part II)

Robert Buck, Out of the Blue

About The Lacanian Review

This series features testimonies of the pass, new theoretical developments in Lacanian psychoanalysis, dialogues with other discourses, and articles on contemporary culture, politics, art and science.

Each issue explores a theme intersecting the symptoms of our era and emerging work in the New Lacanian School (NLS) and the World Association of Psychoanalysis (WAP).