This book articulates a possible future for Lacan and psychoanalysis, through an exploration of the historical trajectory of psychoanalysis and a survey of the ways Lacanian psychoanalysis offers a unique response to the pressing clinical demands of our time.

Much of the book stages this through explications of specific ways Lacanian concepts have developed as a reading of the clinical – as well as the broader psychic and social – phenomena of our moment in history. Psychosis, which is an increasing clinical phenomena, and addiction, which is often described as a contemporary epidemic, are given longer treatment here, while other chapters address central concepts such as trauma, fantasy, the symptom, the body, transference, knowledge, and love.

The book closes with two sections of reflections on psychoanalysis outside of the Lacanian orientation and on the general mental health field.

‘This book is very original. It intends to introduce the reader to present-day clinical developments within the Lacanian orientation and at the same time to serve as a subjective testimony, a Bildungsroman. Its presentation of twenty-first century psychoanalysis plunges the advances of Jacques-Alain Miller’s reading of the “last Lacan” within the current American clinical context. The Bildungsroman describes the subjective path between the encounter with Lacan in the humanities at Duke University and the modulation given to its clinical practice by the author, Chair of a Psychiatry Department. This route goes through the experience of a psychoanalytic cure in its present-day form. One of the aims of the book is to introduce the theoretical displacements of Lacan’s teachings as answers to the clinical challenges met by a practitioner as aware of the societal aspects of the symptom as to its singular aspects. And so he does! It’s a success.’
—Éric Laurent, past president of the World Association of Psychoanalysis 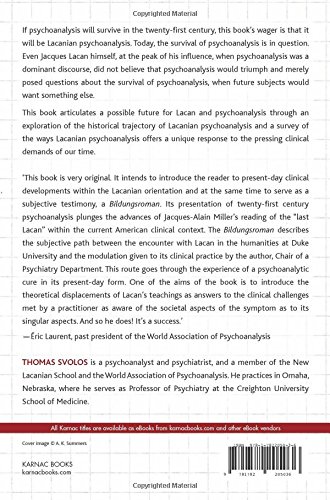