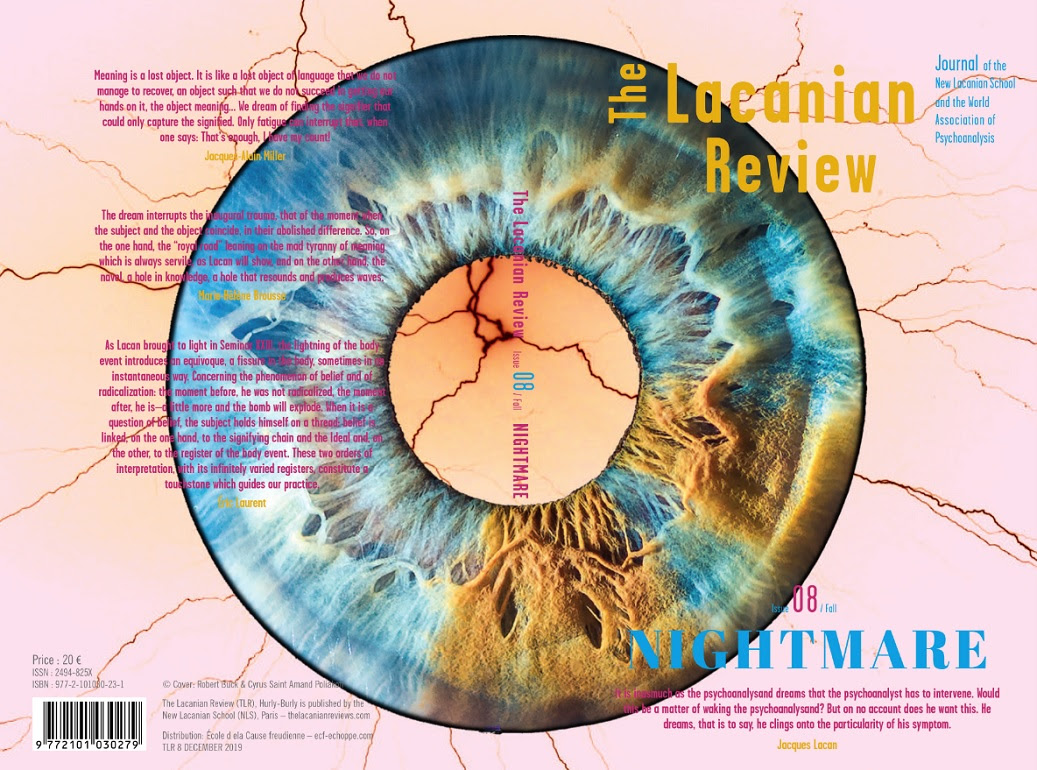 The Lacanian Review (TLR) takes Lacan’s proposition that we wake up in order to continue dreaming, with eyes wide open. What wakes us up? The Nightmare. With new translations of Jacques Lacan and Jacques-Alain Miller, TLR explores how psychoanalysis maps the oscillation between asleep and awake that jolts our social and political circadian rhythms. What is the function of the dream now in analytic practice, in cultural production, and in the global nightmare that confronts us everyday when we wake up?

Presentation: The Lacanian Review No. 8: ‘Nightmare’

The upcoming year marks the 120th anniversary of the dream as royal road of the unconscious. Through dreams, fragments of speech are cobbled together to construct a superhighway of signifying overpasses, byways, and detours around what remains “off-the-grid,” unspeakable. Yet the horror of the dream appears as the nightmare which makes our bodies bolt upright in bed. If the Freudian dream was paved with fictions of desire, the Lacanian nightmare returns us to the real of the drive, the impossibility to see, with eyes open or closed. Today we encounter contemporary life just as fragmented and terrifying as the nightmare that dreams always cloaked.

In this issue, Jacques-Alain Miller highlights the lost object of language, revealing the topology of holes in dreams. A new translation of Jacques Lacan leads us to a moment of awakening via the dream of psychoanalysis. Éric Laurent orients the axes of interpretation that guide contemporary clinical practice. Analysts of the School put nightmares to work. Following testimonies of the pass, Marie-Hélène Brousse returns to the real that does not stop being written through the dream-principle of the unconscious. And as the artist precedes the analyst in their knowledge of the unconscious, TLR presents a dialogue with the poet, Kenneth Goldsmith and artist, Cheryl Donegan, who follow a metonymical drift between the dream of art making and the nightmare of art in the world.

Eyes Wide Open
Marie-Hélène Brousse, Artifice, the Other Side of Fiction
Carolina Koretzky, Variants of the Desire to Wake Up
Jorge Assef, A Moment of Awakening Beyond the Nightmare

Interpretation: from Truth to Event

Politics: Dreaming in Another Language
Kholud Thabit-Sghayer, Plurality of Languages … Plurality of Homes
Ruzanna Hakobyan, Spoken Languages in the Analytic Cure
Peggy Papada, “[…] There Will Be Some Psychoanalyst Who Responds to Certain Subjective Emergencies”

Autopsy of an Interview
A Dialogue with Kenneth Goldsmith, Cheryl Donegan and The Lacanian Review

About The Lacanian Review

This series features testimonies of the pass, new theoretical developments in Lacanian psychoanalysis, dialogues with other discourses, and articles on contemporary culture, politics, art and science.

Each issue explores a theme intersecting the symptoms of our era and emerging work in the New Lacanian School (NLS) and the World Association of Psychoanalysis (WAP).